Buddypress vs bbPress : Difference between bbPress and BuddyPress

If you’re new on WordPress then bbPress & BuddyPress is very confusing. The fact is they both start with the same letter and end with the same.

However, there are instances in which a website or community can benefit from the creation of a personal social network using networks that are already on the market.

Examples would include the WordPress website forums, which run on the bbPress.

Which one should you choose? Which one would be best for you? We will examine all the issues one by one and explore the differences and similarities between the two platforms.

bbPress is a community-based plugin for WordPress that has been developed by Automattic and yes it is free to use.

The plugin’s main purpose is to create website discussion boards and extend the website’s functionality with the integrated interface and WordPress feel.

Add-ons that improve its functionality are also blessed with bbPress. Some of the best examples include Better bbPress Signature, bbPress New Theme, and more. bbPress provides the following features:

BuddyPress is the work of Automattic, the WordPress platform team, which ensures its seamless integration into the WordPress ecosystem.

BuddyPress is itself one of the finest ecosystems for the creation of social networks, with hundreds and thousands of plugins making websites created using BuddyPress more functional and impressive.

In order to add value to the BuddyPress platform, it comes at no cost, just like most other Automattic services.

Even they are different plugins and are developed for different purposes. They do have some similarities, and we will try to list some of them below:

BuddyPress vs bbPress: The Difference

Both the plugins are made for different purposes. Below is some point that shows the difference between BuddyPress vs bbPress.

The choice of the plugin depends entirely on the requirements. If you address a small to medium audience and want only a functionality based on the forum, then bbPress is for you. It is not a tough call after all to find the best software to create a kick-ass community, whether forum base or more social.

If, on the other hand, you speak to a large number of visitors, BuddyPress is for you. The reason is better is to control various functionalities and also provide a diverse audience with features.

Both plugins have the same core functionality but separate as soon as they have more to offer. For small and medium-sized websites, bbPress is the right choice.

If you liked this article, then please subscribe to our YouTube Channel for WordPress video tutorials and more. 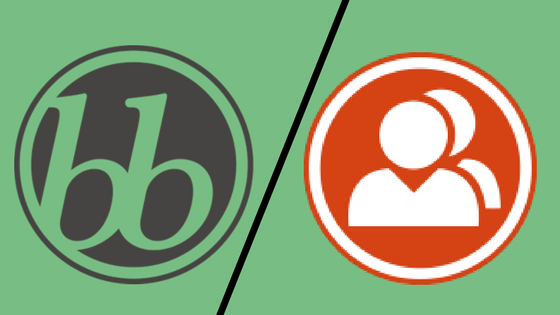 Hey there, welcome to WPbloggerbasic. I’m Ayush Singh, founder of this blog. I am a part-time blogger and affiliate marketer. I help Bloggers to get unique blogging, SEO, WordPress, and Affiliate Marketing guides to take their blog to the next level.

Stay Connected with us

2 thoughts on “Buddypress vs bbPress : Difference between bbPress and BuddyPress”